Seattle: The Hub Of King County 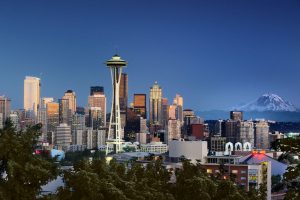 Seattle is one of the fastest growing cities in the nation, and the largest city in the Pacific Northwest. Located between beautiful Lake Washington and Puget Sound, Seattle is ideal port location and is indeed one of the largest container handlers and Asian trading hubs in the United States.

Seattle was originally inhabited by Native Americans of the Duwamish and Suquamish tribes. Settlers first appeared in 1851.

Today, Seattle is a vibrant, thriving community and is the center of technology and business for the Pacific Northwest. The city is famous for many of its cultural contributions, including the iconic Space Needle, the Seattle Seahawks and “grunge” alternative rock which originated in the early 90’s.

The Seattle area is home to some of North America’s top companies, including Amazon, Microsoft, Boeing and Costco.

Because of its tremendous culture and business environment, it attracts many of King County’s most successful and affluent people. We serve the population Seattle and its surrounding cities such as Kirkland, Bellevue, Redmond and Tacoma with considerable knowledge and expertise on:

At Executive Wealth Solutions, we employ highly innovative methods like Privatized Banking in order to help you accumulate and retain wealth while minimizing taxes.